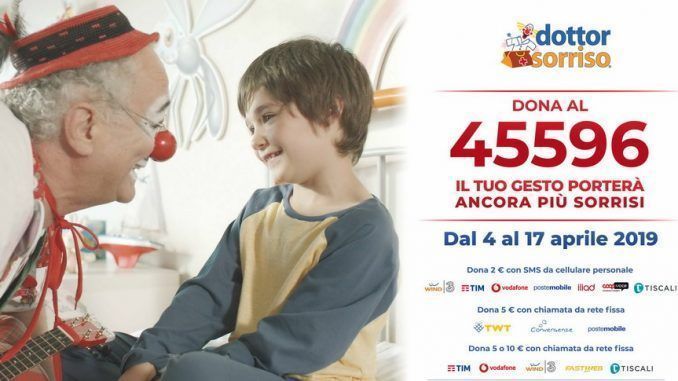 Solidarity sms to give smiles to children in the hospital

Solidarity sms to give smiles to children in the hospital

The SMS solidarity campaign of the Dr. Sorriso Onlus Foundation is underway. From 4 to 17 April with an SMS or a fixed network call to the solidarity number 45596 it will be possible to help the small patients of the pediatric departments to experience hospitalization in a more serene way through #lamagiadiunsorriso.

Solidarity text messages and calls to give serenity and courage to children forced to stay in hospital for a long time to treat serious diseases or face delicate surgical operations. There Doctor Smile Foundation onlus, which has been reassuring the hospitalization of pediatric patients for over 20 years through the clown therapy, launches the solidarity sms campaign “The Magic of a Smile”, aimed at enhancing the activities of the non-profit organization and therefore at giving smiles, but also strength and moments of light-heartedness, to the little guests of the pediatric wards and their families.

The initiative will be active from 4 to 17 April: with a text message or a landline call to 45596 it will be possible to help improve the state of mind of children in hospital and their parents through a donation of 2, 5 or 10 euros.

«Currently the Doctors Smile, operators professionals with specific training, they are present in 16 hospitals and 4 institutes for physical and intellectual disabilities distributed in 12 Italian provinces and carry out around 6,000 hours of clown therapy each year, helping an average of 35,000 children in 28 pediatric wards and outpatient clinics and supporting 105,000 family members of hospitalized young patients. Our goal is to increase the hours of intervention by our Dr. Smile and the number of departments and hospitals in which they are active », he explains Fabio Garavaglia, President of the Dr. Sorriso Onlus Foundation.

«The Clownterapia – he adds Cristina Bianchi, Director of the Foundation – It is not, as one might think, a simple game or entertainment activity, but a real professional activity that integrates traditional treatments, helping to reconstruct, through the smile, the child’s defenses in the face of the trauma of the hospitalization. Laughing contributes, in fact, to improving the patient’s psychological state, influencing decisively on the possibility of facing the disease and, in some cases, on the effectiveness of the treatments. It is scientifically proven that laughing determines a reduction in the administration of analgesics, hospitalization times and clinical improvement times and an increase in immune defenses and the level of endorphins, with consequent increase in the pain threshold in the patient. In short, the positive effects of clown therapy on child care are fully recognized for their therapeutic value”.

Clown therapy also has positive effects on all the other protagonists of a child’s treatment process, i.e. on the medical and paramedical staff and on the patient’s relatives and friends, who not only suffer the indirect effects of the disease, but also exercise a great influence on the little one and on the environment that surrounds him.

Doctor Smiles help children not only in hospital rooms, but also in the difficult moments preceding and following surgery, accompanying young patients to the operating room and assisting them in the delicate moment of waking up after anesthesia. Foundation Dr. Sorriso Onlus has launched the SMS solidarity campaign “The magic of a smile” to enhance this and other services and help more and more children and families to face the difficult moments of hospitalization in the hospital as clearly as possible.

The initiative is supported by the dancer and presenter Rossella Brescia, who once again this year has chosen to lend their face and voice to the solidarity sms campaign of Dottor Sorriso Onlus. The support of the radio note is also fundamental Rds, media partner of the solidarity initiative.

For info on the Fondazione Dottor Sorriso Onlus: www.doctor smile.it

Solidarity sms campaign “The magic of a smile”

– 5 euros for calls from TWT, Convergenze and PosteMobile landlines;

– 5 or 10 euros from a Tim, Vodafone, Wind Tre, Fastweb and Tiscali landline.

Dr. Sorriso Onlus was born in 1995 with the mission of re -establishing the hospitalization of smaller patients in the hospital and supporting their relatives through the Clownterapia. From 1995 to today Dr. Sorriso Onlus has grown a lot and today the Dr. Smile, who visited the pediatric departments every week and teach children from evasion from sadness, operate in 28 departments and pediatric clinics in 16 hospitals, 4 institutes for physical disabilities e intellectual, bringing the smile to over 35.000 children every year and supporting 105 thousand family members of young patients in 12 provinces throughout Italy.

The benefits of the clownterapia

Laughing contributes to improving the patient’s psychological state, influencing decisively on the possibility of facing the disease and, in some cases, on the effectiveness of the treatments.

It was scientifically proven that laughing determines:

– a reduction of up to 20% in the administration of analgesics [1];

– a reduction of the hospitalization times of at least 1/3 and up to half, compared to children not involved in the clownterapia; [2]

– a reduction in clinical improvement times: children assisted by Doctor Smiles improve in 3.76 days; those of the control group in 5.36 (1/3 less) [3];

– an increase in the immune system;

[1] Proposal for a Formisano law on the introduction of the figure Institution of the hospital ward animator.

[2] Research carried out in 2003 at the San Camillo Hospital in Rome.

[3] Research carried out in 2003 at the San Camillo Hospital in Rome.

[4] The research carried out by Mario Farnè, doctor and psychotherapist, professor of medical psychology at the University of Bologna, show that positive emotions stimulate the cells of the central nervous system to produce greater quantity of betaendorphins, natural opiates that are healthy for the immune system and which increase the resistance to pain.

Hospitals in which Dr. Sorriso operates

Province of Monza-Brianza: Hospital of Desio and Vimercate

Institutes for physical and intellectual disabilities in which Doctor Smile operates